Skip to content
There are millions of facebook users who are changing their display picture, even as we speak, to the colours of the French flag. What does it signify? I know you would say it symbolizes your support to the victims of the horrendous attacks by the Islamic State. But then why only symbolize your support to Paris and why not to Beirut or Kenya or in every colour which gets tainted. Why only the French Colours? 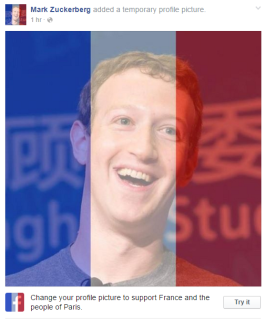 Just a day before the Paris attacks two suicide bombers killed 43 people and wounded around 250 people in the Lebanese capital. But did then Facebook even cared to look at it? Did it even came in the news, except remaining a flashing headlines on the bottom of your television sets? Is it because Facebook and various news channels considers Lebanon nothing more than a third world country?

In April 2015 four gunmen killed 147 people in a Kenyan University and injured several others. Why didn’t then Facebook brought out such a show to present sympathy and support to those victims? Is their life not worth changing your Facebook DP? Does Mark Zuckerberg doesn’t consider their pain as much as the Paris attack victims? Why this injustice?

Yes, Mr. Zuckerberg this is absolutely wrong and I register my disagreement by not changing my picture and making you understand that every life is equally important, whether it is that of a child drowned in the Syrian refugee crisis or a victim of a shootout in a developed nation…

Leave a reply don't hold yourself back!! Cancel reply

This site uses Akismet to reduce spam. Learn how your comment data is processed.